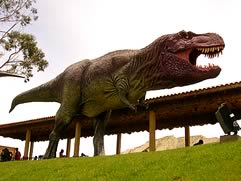 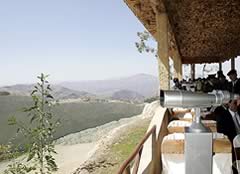 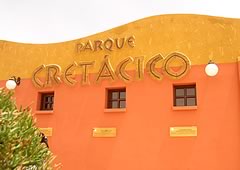 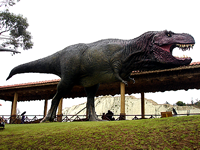 65 million years ago the site of Sucre's Fancesa cement quarry, six kilometers from the centre, was the place to be for large, scaly dinosaurs. When the grounds were being cleared in 1994, plant employees uncovered a nearly vertical mudstone face bearing over 5000 tracks, some of which measure up to 80cm in diameter,from over 150 different species of dinosaurs.

While you once could go right up to the tracks, these days you have to be content with gazing at them from the brand-new Parque Cretacico (Cal Orck'o). This slick, family-friendly visitors centre has a couple of dozen scary life-size models of dinosaurs, as well as an audiovisual display and a restaurant. From the terrace, you can examine the tracks on the rockface opposite with binoculars.

Cretaceous Park (Cal Orck'o) is definitely one of the most unique attractions in Bolivia. At first glance, the dinosaur tracks look like simple holes in rocks. But after your eyes adjust, you'll start to see distinct patterns of movement. All of a sudden, it's very easy to envision dinosaurs slopping through the mud, trying to escape from their enemies, and searching for water.

It is believed that the rocks in the area date back some 68 million years, well before the Andes were formed. Supposedly, there was a lake here surrounded by a forest. Dinosaurs trudged through the mud in the forest toward the lake in search of water. Before the footprints had a chance to disappear (about a 2-week time period), they would be covered by sediment, which settled over the mud and preserved the prints. The bilingual guides will be able to tell you their theories about which dinosaurs were doing what when they walked through this area 68 million years ago.

The area that surrounds Sucre is of great paleontological value. Cal Orcko is believed to be the largest extension of its kind in the planet. Its vertical position was originated by the tectonic movements of the Earth.The width of the wall is impressive, it is about 80 meters in height and 1.2 kilometers long, so there is still plenty to investigate and research in this area. There are about 5,000 footprints, and so far 294 species of dinosaurs that have been identified, it is also believed that there used to be several lakes in the area when these animals inhabited it.

There are footprints of Tyranosaurs, Brontosaurus, Carnivore-dinosaurs, etc. There is a great variety of petrified remains of turtles, crocodiles, fish and seaweed. The eleven prints of the Anquilosaurus have impressed the scientists. Before discovering these prints in Sucre, scientists theorized that this species of dinosaur had never lived in South America. There is also the longest trail of marching dinosaurs ever recorded anywhere on Earth. One of the most famous dinosaurs has been lovingly called "Johnny Walker", because it left its footprints over an extension of 347 meters.

At this place we can also find the "Farallon de Orepajla" (out-jutting rock).

Located about 20 minutes outside of Sucre on the road to Cochabamba.