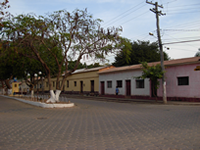 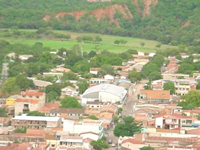 Camiri has an estimated population of 35,000 inhabitants, also known as "Camirenos". The town is located on the shores of the Parapeti River in a small valley surrounded by rolling hills on the East, North, and South, and by the Aguarague mountain range on the West.

Known as the Gran Chaco, this is a hot and arid region of dry forest savannahs and some rolling hills, mostly brushy vegetation and small trees, very little water, and surprisingly, quite a lot of flora and fauna species. Camiri is known as the oil capital of Bolivia because of the intense petroleum and natural gas exploration activities that are carried out here.

Its population is primarily of Guarani and Spanish origin, although many Aymara and Quecha immigrants have settled in the area. Here the indigenous Guarani have been displaced by other peoples who came to the area after the discovery of oil in the 1920s. Most people here, especially the Guarani, live in extreme poverty.

It is said petroleum used to bubble up to the surface and the Guarani tribes used it for curative purposes, as well as to light their fires. In 1926 petroleum spewed out from the ground and contaminated the Parapeti River. Soon after, Standard Oil Company was installed at this location and a town was "born". After Standard was nationalized, the government took over operations and named the state-run oil company Yacimientos Petroliferos Fiscales Bolivianos (or YPFB for short).

When the country's oil and natural gas industry was once again capitalized and opened up to foreign investment in 1997, the local population was motivated to improve hotel and tourist infrastructure in the area, several small companies that provided services to the oil companies sprang up, a branch of the UAGRM university in Santa Cruz was built, and the construction of a road from Abapo to Camiri was planned. It is as yet unknown how the recent (2006) nationalization again of the oil industry will affect the city's economy.

Camiri is near the borders of Argentina and Paraguay, a strategic location for oil and gas exports and other types of trade. It was one of the sites where battles were fought during the Chaco War between Bolivia and Paraguay (1932-1935). Just 8 kilometers from town visitors can enjoy the "El Chorro" waterfall. Nearby you can also visit hot springs and several other rivers and streams.