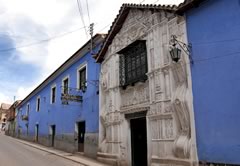 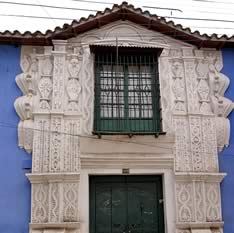 his construction is also known as 'Las Recogidas' (The Cloistered Ones). It used to be a community house for lay sisters, most of whom were Natives. This religious construction belongs to the Franciscan Order. It basically consists of three portals, all of which have very original designs. The Casa de las Tres Portadas does not resemble any religious architecture; instead, it has very profuse and strange images of exquisite beauty.

The portals are made of brick and covered with lime, proof of the economic decline that the town, known as "The Imperial Village", was going through during the XVIII century. Two of the portals include bases that have a door and a window, the third does not have a window, but it has a detailed tapestry in front of it that covers the entire floor.

Potosi's elaborate colonial architecture merits a stroll around the narrow streets to take in the ornate doorways and facades, as well as the covered wooden balconies that overhang the streets. The pretty Casa de las Tres Portadas is an architecturally notable home.