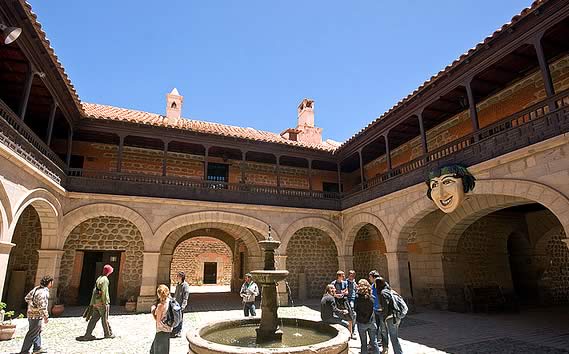 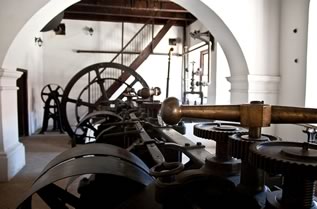 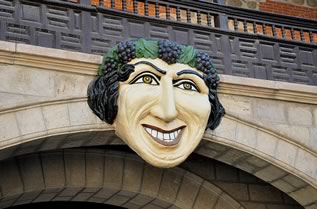 The Casa de la Moneda is a vast, elegant, and strikingly beautiful building that takes up a whole city block.

In many specialists' opinion, it is the most important building among the colonial architecture of South America. Its construction began in 1750 and concluded in 1773. The works were in charge of the manufacturer and architect Salvador de Vila. This mansion is considered a national monument and occupies a square and stores valuable samples of paintings and sculptures, besides the furniture and other objects of historical interest.

The biggest attractions in this house are the lamination machinery used to wedge coins, the main oven for silver foundry and the collection of dies for coining money. A picturesque detail is the smiling polychrome mask that is at the entrance and that had been placed there at the beginning of the War of Independence, with the intention of covering a royal plate.

The Toledo Viceroy completed the construction of the first "Casa de la Moneda". In 1572 foundations were placed in the "Plaza del Regocijo" (Main Square known today as "Plaza 10 de Noviembre"), under the supervision of the mason and master builder from Potosi Jeronimo de Leto. This construction was completed in three years.

The Casa de la Moneda is currently one of the most important repositories used to illustrate the history of the exploitation of minerals during colonial times. Inside there are several stages, which have bedrooms, living rooms, and other typical rooms, depicting classical scenes of the time of the colony. There are other additional spaces which serve as art galleries, with interesting collections of colonial and republican style paintings. There are also native-style textiles, typical costumes from neighboring communities and historical pieces from the Chaco War with Paraguay.

This is the actual site where coins used as the main currency throughout the Spanish Empire were were actually wedged or minted. There is also a numismatic room. The methods used in the manufacturing of coins and the machinery that was used can be seen at this historical and colonial monument.

Legend has it that when the king of Spain saw the bill for its construction, he exclaimed 'that building must be made of silver'. These coins, which bore the mint mark 'P,' were known as potosis. The building has walls that are more than a meter thick, and it has not only functioned as a mint but also done spells as a prison, a fortress and, during the Chaco War, as the headquarters of the Bolivian army. As visitors are ushered into a courtyard from the entrance, they're greeted by the sight of a stone fountain and a mask of Bacchus (known as the mascaron), hung there in 1865 by Frenchman Eugenio Martin Moulon for reasons known only to him.

Apart from the beauty of the building itself, there's a host of historical treasures here. There's a fine selection of religious paintings from the Potosi school, culminating in La Virgen del Cerro, a very famous anonymous work from the 18th century. It depicts the Virgin Mary as a Pachamama-like figure, actually within the earth, in this case represented by the Cerro Rico. It's full of symbols relating to the union of traditional Andean religion with Catholicism.

Perhaps the highlight of the visit are the immense assemblies of mule-driven wooden cogs that served to beat the silver to the width required for the coining. These were replaced by steam-powered machines in the 19th century. The last coins were minted here in 1953.

Most of the silver mined in Cerro Rico came here to the Casa Nacional de la Moneda to be transformed into coins. When it was completed, it was the biggest building in the Americas. The building also housed Spanish families who worked for the government, while the third floor was used as a prison for African slaves. The whole complex is now a museum with 20 different galleries that all speak of the wealth and rich history of this city. For example, during Potosi's glory days, there were 32 churches in the city.

Note that you can only visit the museum on a 2-hour guided tour. The English-speaking tours depart at 9am, 11am, 2pm, and 4pm.