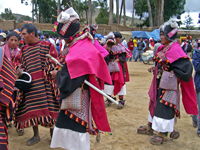 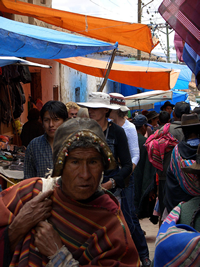 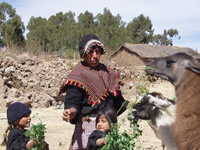 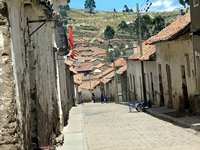 The traditions, music, outfits and dances inherited from ancient times make this colonial town a center of great attraction.

Tarabuco is located at 60 Km. from Sucre, in Yamparaez province. It has a very colorful Sunday fair where some of the local residents exhibit outfits, helmets and ponchos of various colors, designs and patterns, and "chuspas" (colorful pouches or purses used to carry coca leaves), "chumpis" (skirts) and musical instruments. The most popular of these is the "Charango", which is a miniature ten-string Bolivian guitar made with the empty caparison of an armadillo.

The local farmers also sell ceramics and very colorful fabrics. This is perhaps one of the most typical open-air markets in the Andes.

Every year, on the third Sunday of March, thousands of people from the areas that surround Tarabuco join the tourists and residents of Sucre to celebrate "Pujllay", one of the most traditional carnivals of Latin America, in which more than 60 communities participate. At this festivity, there is the Jumbate battle, which is a recreation of the battle of the Natives from the area in their attempt to defend themselves from the attack of the Spaniards, on March 12, 1816. During this "battle" several men and women dance to the rhythm of music played with "charangos", "zamponas" (panpipes), "torokos", "pinkillos" and accompanied by songs sang in Quechua. Visitors can also try some of the local cuisine, (mostly spicy food) and drink "chicha" (drink made of fermented corn).