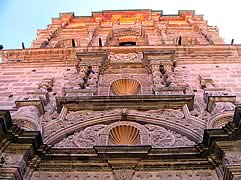 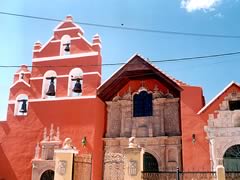 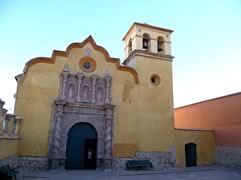 The church of San Lorenzo de Carangas was one of the first churches ever built in the area. Once the cathedral was constructed it became a parish used mostly by the natives. The portal has a baroque-half breed style of immense ornamental wealth. The details made of carved pieces of stone have several celestial symbols on them, including the sun, the moon and the stars. Its columns display "indiatiles" (baroque style moldings). The portal is one of the best examples of the combination between baroque style and Bolivian mestizo art.

The ornate Baroque mestizo portal of Iglesia de San Lorenzo de Carangas is probably one of the most photographed subjects in Bolivia. It was carved in stone by master Indian artisans in the 16th century, but the main structure wasn't completed until the bell towers were added in 1744. Inside there are two Holguin paintings and handcrafted silverwork on the altar. The church was renovated in 1987.
Its cover of two bodies is really attractive. The temple, reformed by the middle of the 18th century, shows in its interior an ornamented half point arch which has two remarkable naked feminine figures called indiatides.

The temple of Copacabana was built in the 17th century. Known by its Mudejar style and its wooden dome. Its cover of manierista style deserves to be thoroughly seen, as does its major altarpiece worked in stone.

The Cathedral has a transitional style that combines baroque architecture with neo-classic details. It is considered to be one of the most beautiful examples of large cathedrals in Latin America.

At plain sight, the main focus goes to the contrast between the golden decors placed over white surfaces. These golden additions can also be seen in the form of moldings at the base of the white columns, which still have some ceramic tiles left on them from colonial.

Known for its Mudejar style and its wooden dome, its cover of manierista style deserves to be apreciated, as does its major altarpiece worked in stone.

San Cristobal has a typical Renaissance style. It has a single level shaped like a Latin cross. The main entrance was constructed in 1682 and is located on one of the sides of the temple.

The main altar has a baroque style, combined with the mestizo style of Bolivian art. The altar located on the aisle of the left, is from the Renaissance period, the design itself is of great quality and very especial design.

This convent has a cornice or crown block with three shields. The one in the middle belongs to the Order of the Carmelita Priests, the other two placed on the sides belong to the co-founders of the church and contain their portraits as well.

The Santa Teresa museum was built on the first and second cloisters (cloisters or monastic states) of the convent. It has retained its architectural style from the time of the Viceroy and it presents one of the best collections of paintings in the country. The museum also displays wooden carvings, fabrics, furniture, silverware, mirrors and various other objects from the XVII and XVIII centuries.

Once you visit this renovated church and convent, you'll have an excellent picture of the day-to-day routine of the Sisters of the Carmelita order. This was a working convent from 1691 through 1976 (nowadays, the sisters live next door), and it seems as if for those 300 years, the daily rituals changed very little. On the 3-hour guided tour, you will see the nun's simple bedrooms, their recreation room, the room and the tools that the nuns used to prepare the wafers for Mass (this is the only convent in Bolivia that continues to make these wafers by hand), and the place where the nuns received their visitors. Here, the nuns were separated from their callers by a dark screened wall. They weren't allowed to touch or see their guests; they could only exchange words. It wasn't until 1967 that the pope revoked this order.

Tourists can also visit the impressive church, with an elegant gold-leaf altarpiece, where the aristocrats of Potosi would pray. There are also countless galleries full of colonial art, antiques, Murano glass, and hand-painted porcelain dishes.

Visitors can only tour the convent on guided tours, which leave only when there are three or more people. It's best to arrive when the museum opens in the morning or the afternoon to make sure that you will have enough time for the 3-hour tour.

The cloister's main section conatins a series of 25 paintings by Gregorio Gamarra which depict the life of "San Francisco de Asis" (Saint Francis of Asis). This type of decorated vault was one of the first ones ever made in Potosi. It has three vessels covered by a large gorge vault and nine half-sphere domes. It has a beautiful baroque style main portal, which was constructed by the stonecutter Sebastian de la Cruz.

The vestibule or anteroom of the sacristy has paintings of various anonymous authors, such as "Flagelacion" (Flagellation), "La Purisima" (The Pure One) from the XVIII century and pieces from Maestro Melchor Perez de Holguin, such as "La Ereccion de la Cruz" (The Erection of the Cross).

There is also an incredible collection of sculptures of Gaspar de la Cueva and two more collections of paintings of Virgins, Martyrs and Saints.

The look-out tower can be accessed by the public and is a perfect spot to view the city and the "Cerro Rico".

The rather ordinary-looking Iglesia de San Martin was specifically built in the 1600s for the local natives who would come to this church from various places in order to do their mandatory work in the mines. It used to be part of the Order of Mercedarios.

The main structure has a single vessel with walls made of adobe and towers which have been affixed to the main structure on either end of the construction. The temple has a combination of mestizo style with a strong presence of baroque art.

Today it is being run by the French Redemptionist Fathers. Inside is an art museum, with at least 30 paintings beneath the choir depicting the Virgin Mary and the 12 Apostles. The Virgin on the altarpiece wears clothing woven from silver threads.

The church was constructed for the parish of the Natives from "Pacajes de Umasuyo" and has retained its original typology.

The base has the shape of a Latin cross. The main vessel has three chapels and a victory arch. The pulpit and an altar, brought from the temple of "Salinas de Yocalla" are among the greatest jewels of baroque architecture. The portal has been remodeled, which has provided it its final, multi-colored appearance.

In its interior, the most interesting piece, and focus of great attention, is the image of Saint Peter, a work done by Melchor Perez de Holguin.

This tower has been decorated with mestizo, indigenous motives. It is an original and unique creation that is related to the architecture of the viceroy era. It is amazingly beautiful and magnificent to look at.

The Torre de la Compania has been considered as the best religious monument of its time.

The restored Iglesia de La Merced is lovely, with its carved pulpit and a beautiful 18th-century silver arch over the altarpiece. It was constructed between 1555 and 1687.

Address Bolívar at Quijarro, town center Keyword art-related, religious/spiritual, architectural highlight Iglesia de San Agustín, with its elegant Renaissance doorway, is known for its eerie underground crypts and catacombs. At time of research, it was being equipped to open for the public.

Building of the Iglesia de San Benito began in 1711. It is laid out in the form of a Latin cross and features Byzantine domes and a distinctive mestizo doorway.

The former church and convent of Iglesia de San Bernardo is most notable for its spectacular façade of un-dressed boulders. The cavernous interior now houses a Spanish-sponsored school of art restoration.

Iglesia de San Juan de Dios has stood since the 1600s despite its adobe construction.

The recently renovated Iglesia de Santo Domingo contains an ornate portal, an unusual paneled ceiling and one of the eight original panels from the life of Santa Rosa de Lima, by Juan Diaz and Juan Francisco de la Puente. There are alsoother colonial paintings and sculptures located here. To gain admission to the church, visit on Sunday prior to the Mass.