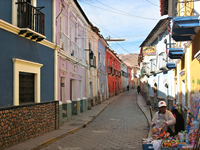 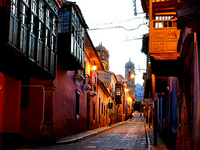 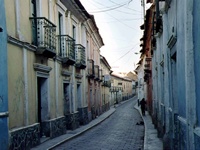 Unesco World Heritage North of the Iglesia de San Agustin, Calle Quijarro narrows as it winds between a wealth of colonial buildings, many with doorways graced by old family crests. It's thought that the bends in Calle Quijarro were an intentional attempt to inhibit the cold winds that would otherwise whistle through and chill everything in their path. This concept is carried to extremes on the Pasaje de Siete Vueltas: 'the passage of seven turns'.

During colonial times Calle Quijarro was the street of potters, but it is now known for its hat makers. One millinery worth visiting is that of Don Antonio Villa Chavarria (Quijarro 41).

The intersection of Calles Quijarro and Modesto Omiste, further north, has been dubbed the Esquina de las Cuatro Portadas because of its four decorative colonial doorways.