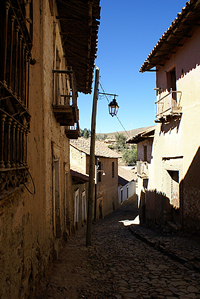 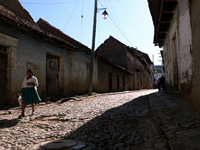 At a distance of 140 Km. from Cochabamba on a paved road lies Totora, the capital of Carrasco province. Its cobble stoned streets and panorama of red tiled roofs recall Bolivia's colonial and republican past.

Totora is a veritable museum with a variety of well preserved architecture and the well known National Piano Festival that is held annually drawing famous performers from near and far.

Several years ago Totora suffered an earthquake that led to a revival in colonial restoration and reconstruction, reminding the town's inhabitants of the importance of historical restoration for the development of tourism in the area. The patron saint festival of the province is called "Nino San Salvador" and occurs on January 1st.

To the east of the provincial capital Totora along the old road between Cochabamba and Santa Cruz lies the attractive Huerta Molinos area. Here lie ancient millstones that once turned by the power of the water cascading down from the ravines above.

The most important destinations in the municipality are the "La Casa de la Cultura" a beautiful and luxurious mansion that today holds an interesting museum. The "Seven Colonial Bridges" are emblematic of the city and date from the colonial period.

"La Pajcha" is a picturesque waterfall that descends about 30 meters with an ancient mill nearby. The "Julpe" are fascinating pre-historic cave paintings located 22 Km. from the center of Totora.