The Parador Santa Maria la Real is situated in Sucre city heart opposite the university, very close to the main square with all its attractions. 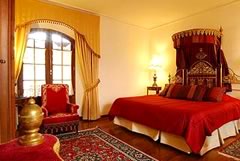 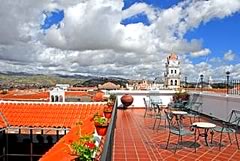 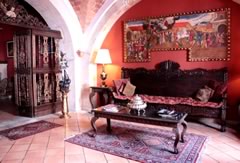 Old fashioned elegance and class - fantastic. Originally built in the 1600s, the Hotel Parador has been extensively refurbished. The renovations took 4 years with the attention to detail going as far as shipping a specific pigment of paint over from Spain that matched the original colour of one of the courtyards.

The Parador Santa Maria la Real was renovated but conserves its original structure and constructive details. The structure of the old building has been adapted with modern technology to give the maximum comfort.

This extremely stylish colonial hotel boasts an arcaded courtyard, antique furniture, a spa bath with a view, and a curious historical underground section. The rooms are all individually designed, stylish, light and very peaceful. Beds are lovely and inviting.

The Parador Santa Maria la Real is charming and tastefully furnished. Rooms are comfortable and the staff goes above and beyond the call of duty. The hotel is elegantly decorated with a fantastic view from the large sun deck. The rooms are very nice and well equipped and during the chilly winter nights the heating works impeccably.

The hotel has a great roof terrace as well as a cellar which has been decorated with antique artifacts. There is a large reception room for bigger events.

Throughout the renovations, meticulous attention was paid to preserving the original style of the building. This included the uncovering of the original vaulted ceiling in the lobby. The long search for original antique furniture means that each room in the hotel is furnished differently.

The rooms range from the thirteen double rooms with antique headboards and traditional textiles, to the three junior suites with traditional armoires. The master suite has a bed similar to those in old castles that kings and queens used to sleep on.

There are a few unique features to the Parador Santa Maria la Real which help it stand out from the rest. In the basement there is a mini-museum containing items that were discovered during the renovation. There is a beautiful terrace area on the roof, 'El Mirador' which is wonderful for viewing the churches of Sucre, and a banquet hall with a recreated carved wooden ceiling called the 'Salon los Oidores'.

Reception has a cosy sitting area on one side with antique furniture and reception desk on the other with a beautiful icon of the Virgin Mary behind.

Breakfast is included in the price and, as with the rest of the hotel, is an elaborate affair. There is the usual array of ham, cheese, cereals and bread. The best bits are the wide variety of fresh fruit and local pastries. There is also a chef who will cook fresh omelettes on request.

The Parador Santa Maria la Real is a hotel with past, history and art in an 18th century house that keeps its original structure with 23 rooms.

In every room the decoration is well taken care of including the smallest details.

All the rooms have:

Subterranean passage and rooms discovered during the restoration of the hotel. Colonial documentation referring to the palace of real Audiencia mentions this subterranean rustic construction, rebuilt during some changes that were made in the palace in 1772.

A hall like no other with a lot of dimensions. It used to be the oratory of the house, covered with an interesting wood work. It has gothic style arcs, an element that was added in the XIX century according of the taste of the time and the great French influence that the city had back then.

The spa has a Jacuzzi with hydro-massages, 6 exercise machines and massages service

The sunday fair in Tarabuco is worth a quick visit to get a taste of a rural comunity.

A must see in Sucre is the Origenes dinner show.